For local Cowichan Valley businesses, the coming year is expected to be one of cautious optimism and holding the course.

That’s the projection from Susan Mowbray, a senior economist with the accounting and consulting firm MNP and one of the lead authors of the State of the Island Economic Report, published annually by the Vancouver Island Economic Alliance.

Mowbray says the Cowichan region enjoys many economic benefits from being so close to both Victoria and Nanaimo. Business opportunities from those cities ‘spill over’ into the region, while lower housing prices attract both residents and investors.

“Overall, the outlook remains positive, but things are slowing down,” Mowbray says. “We’re not expecting to see expansion at the same pace in 2019 that we’ve seen it in the last two years.”

Mowbray’s comments are echoed by Chris Duncan, a partner with MNP in Duncan who also serves as president of the Duncan Cowichan Chamber of Commerce. 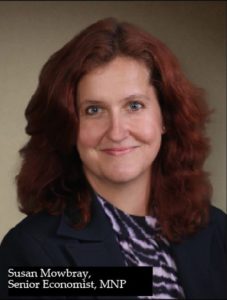 Indicators such as building permits and construction starts were lower in the latter half of 2018, says Duncan, but now appears to be stabilizing. The recent purchase of the Crofton mill by Richmond-based Paper Excellence Canada is bringing renewed hope for job stability at the former Catalyst Paper site.

Mowbray notes that the Cowichan region is exempt from the empty-house speculation tax in force in high-demand real estate markets such as Vancouver, Victoria and Nanaimo. She anticipates that could draw more real estate interest to the area.

One of the ongoing challenges of 2019 for any Island business will be attracting and retaining workers, says Mowbray. The unemployment rate on Vancouver Island is second-lowest in the province at less than five per-cent.

The fall announcement of a new LNG plant in Kitimat is expected to draw even more of the labour pool north as the mega project develops over the next year.

As noted in the most recent State of the Island Report, 2018 saw modest declines in annual lumber production on the BC coast, with shipments to the US declining 16 per cent in the first six months of the year and overall production on the coast down nine per cent.

While shipments of forest products and logs out of Port Alberni and Port of Nanaimo have increased slightly, lack of timber supply will constrain growth in the forest sector.

Measures designed to cool the housing market have had an effect, says Mowbray. Housing prices have softened and current interest rates are slowing the growth of credit.

The Island economy is still heavily dependent on the service sector – the service-producing sector accounts for 82 per cent of all jobs, with just 18 per cent of the workforce producing goods.

“Availability is extremely tight,” he says. “Local government is looking into the issue, and whether improvements in zoning could loosen up the supply of industrial land.”

“That can really hamper development. The longer the process takes, the more it costs developers,” he says.

Attracting and retaining workers in a tight job market raises concerns for Duncan around housing prices and affordable rental accommodation.

The region’s ‘living wage’ of $19.05/hour (the rate a typical household in the area requires to meet basic needs and provide a basic level of economic security) is one of the highest on the Island.

But the region is certainly well positioned to attract a new generation of skilled workers and entrepreneurs, Duncan adds: “It’s nice to see young people coming back to the valley.”

Just when they thought it couldn't get worse, it does. The people living and working in and around...
Community

Governments at all levels need radical change in how they deal with drug addiction/mental health/homelessness on the highway strip...
Community

Germany is widely considered the global leader in solar power, with over a third of the world's nameplate (peak)...